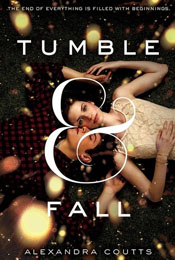 If you live afraid to tumble and fall – you may never get to live at all.

The world is spinning in the shadow of oncoming disaster. An asteroid is set to strike the earth in just one week’s time; catastrophe is unavoidable. The question isn’t how to save the world – the question is, What to do with the time that’s left? Against this stark backdrop, three teens are swept into intertwining stories of love, friendship, and family. And with the ultimate stakes at hand, each has every reason to do extraordinary things. Irresistible and inspiring, Tumble & Fall is a powerful novel of courage, love, and hope at the end of days.

Tumble & Fall by Alexandra Coutts is a story about the end of the world that doesn’t really revolve around the end of the world. Told from the point of view of three teenagers, the story is one of family, friendship, love, lose and surprisingly, new beginnings. When you know your way of life is about to end, maybe permanently, how do you spend those last few days? Zan, Sienna and Caden each go through an incredible journey over the course of the novel.

All three characters are living on the same island and while their stories never really intertwine, they do cross paths at moments to create a cohesive end to the story. Caden lives with his sister and their alcoholic mother, and while he doesn’t have any spectacular plans for his last few days before the asteroid hits, that all changes when his father shows and takes Caden away to the mainland for very sketchy reasons. Caden’s point of view was probably my least favourite, mostly because a lot of the motivations didn’t make sense to me, and it was very removed from the tone of the rest of the book. Zan’s scavenger hunt for a girl her deceased boyfriend Leo had a phone number written down on a receipt for was my favourite storyline. Along with Leo’s best friend Nick, Zan takes off for Boston to see if she can locate this girl and put to rest the question of whether Leo had been cheating on her. It’s an interesting view on questioning every thing you had known, and not being able to get answers from the person involved. It talks about trust, moving on, guilt and love. Sienna also has an interesting story, revolving more around family and what it means, and young love. I definitely felt she and Owen, a boy she knew from when her family used to summer on the island, fell in love extremely quickly, but Sienna is a teenager, and it’s the end of the world. Why wouldn’t she think she was in love. Usually I’m very against insta-love in books, but this time it made sense and worked.

The idea that an impending asteroid hitting the earth could wipe out life as we know it creates an intriguing background for a story that deals with a lot of tough themes; from depression, alcoholism, love and kidnapping to trust, what it means to be family, and kindness. Caden, Sienna and Zan all have a moment where their lives cross near the end of the book and then the last day before the asteroid is supposed to hit and everyone on the island comes together in moments of solidarity and hope and fear and waiting. I was extremely happy with the ending and even though some may not like the ultimately unresolved nature of it, I felt it fit the book perfectly and couldn’t have been done any other way.

Tumble & Fall by Alexandra Coutts is a quiet sort of disaster book. Focused more on the characters and how they choose to spend their possibly last days, the ideas of forgiveness, togetherness and hope in the face of despair really underline and highlight this slice-of-life story. Zan, Caden and Sienna all have wonderfully distinct voices that draw you in to their predicaments, decisions and lives. I couldn’t help myself from wondering what I would decide to do with my time if I knew the end was mostly inevitable. Who would I surround myself with and what would I do? What would you do?

ARC received at Book Expo America 2013 from the publisher. Thank you!

All books reviewed on this blog have either been purchased by me or sent to me in exchange for my honest review.
All quotes are copyright © their respective owners.