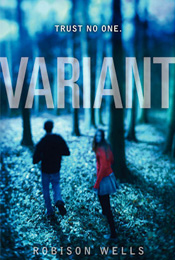 Benson Fisher thought that a scholarship to Maxfield Academy would be the ticket out of his dead-end life.

Now he’s trapped in a school that’s surrounded by a razor-wire fence. A school where video cameras monitor his every move. Where there are no adults. Where the kids have split into groups in order to survive.

Where breaking the rules equals death.

But when Benson stumbles upon the school’s real secret, he realizes that playing by the rules could spell a fate worse than death, and that escape – his only real hope for survival – may be impossible.

Variant by Robison Wells is a crazy boarding school story full of twists and turns like you wouldn’t believe. I’m not joking, I literally shouted at my car stereo at the end of the book. Talk about a cliffhanger!! I’ve always thought it would be neat to go to a boarding school (yes, even before Harry Potter), but I would not want Benson’s experience, at all.

Benson thought he was lucking out by getting a scholarship to a boarding school but after he’s dropped off and met at the doors by Becky, everything goes wrong. There are no grownups. No teachers, custodians, cafeteria workers, no one. The only people present at Maxfield Academy are the students. Divided into gangs, the students are monitored by cameras and recording devices at every turn, work the jobs around the school, teach the classes, act as security and even maintenance. All while trying to study and participating in epic paint ball games. Oh and detention? You’re never seen or heard from again after being sent to detention. Harshest school ever.

Benson can’t understand why people aren’t trying to escape until he’s told about the students who used to be at the school, and those who died before the gangs were formed. But he never tries to stop finding a way past the wall and the fence, back to the real world with grownups and days that makes sense. Benson is a great character, determined and strong and a nice guy. He finds himself getting caught up in the people and the school sometimes, but in the end does what he thinks is best for himself and the others. Of course, the school and the hidden people that run have something going on behind the scenes, and it’s insane. Guys, I did not even see it coming. What I thought it was, it totally wasn’t. Just when you think Benson has it all figured out and is on his way to escape, Robison Wells throws in another twist and more information that makes your brain do back flips.

Although I found it a little weird that not one of the teens at the school had anyone who would miss them or want to check up on them, I guess it could happen (the States is a big and populated place), and it makes the book work. Variant has great characters, and Robison Wells writes so that you can get attached to not just your primary characters like Benson, Becky, Jane or Mason but also the secondary characters. And seriously, trust no one. The gangs these teens have split into are their world in Maxfield Academy and the Society seems to run the show. The bad guys of the book (besides the people who run the school, whom we never see) are other teens and even though they’re working against Benson, you still feel for them. Narrator Michael Goldstrom does a great job of separating voices and reading so that the tension and suspense is clearly heard and experienced.

Variant is a great mystery with so many different genre elements I don’t even want to say them in case I give something away. This is one book where spoilers would be so upsetting to the “holy shit” moments that Robison Wells gives you throughout the course of the book. All I can say, is I can’t get my hands on the sequel soon enough. Cliffhanger of all cliffhangers in this one, you’ve been warned!

All books reviewed on this blog have either been purchased by me or sent to me in exchange for my honest review.
All quotes are copyright © their respective owners.