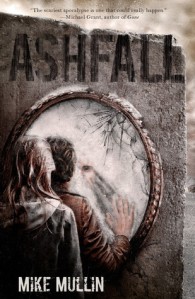 Under the bubbling hot springs and geysers of Yellowstone National Park is a supervolcano. Most people don’t know it’s there. The caldera is so large that it can only be seen from a plane or satellite. It just could be overdue for an eruption, which would change the landscape and climate of our planet.

Ashfall is the story of Alex, a teenage boy left alone for the weekend while his parents visit relatives.

When the Yellowstone supervolcano erupts unexpectedly, Alex is determined to reach his parents. He must travel over a hundred miles in a landscape transformed by a foot of ash and the destruction of every modern convenience that he has ever known, and through a new world in which disaster has brought out both the best and worst in people desperate for food, water, and warmth. With a combination of nonstop action, a little romance, and very real science, this is a story that is difficult to stop reading and even more difficult to forget.

Ashfall is a book that pretty much details one of my worst fears. I live in a place where the harshest natural disasters we ever get is the occasional baby hurricane (and by occasional, I mean like once every five years. If that.), so I am basically terrified of all crazy weather phenomena: the movie Twister used to give me nightmares. So a Supervolcano erupting in Yellowstone National Park? Kind of terrifying!

Alex is alone for the weekend when the volcano erupts, and his house is pretty much toast from falling debris. Making his way first to his neighbour’s house, and then to the local high school, Alex begins a trek to reunite with his family. Along the way he sees that in desperate times, people do desperate things, and he comes face to face with both the worst and the best of people.

Ashfall broke my heart a little bit. The descriptions of the disaster, of the way different people behave when they’re pushed beyond their comfort zone, of the effect on the animals and nature of the area effected by the eruption…and the descriptions of the way that Alex, Darla and so many other people are treated “for their safety” made me want to cry. Alex is so strong. I don’t know that I would have the strength to trek cross country in such harsh conditions. He doesn’t have an easy time of it, and when he comes across Darla and her mother, I breathed a sigh of relief. Now everything would be easier for him. But of course, there are more trials to come before the end of the book.

One of the biggest reasons I loved this book so much was the characters. Alex starts off a typical teenager. The eruption forces him to mature quite a bit, from seeing horrific acts on the part of members of his community, to encountering an escaped convict and experiencing the harsh reality of the refugee camps for people in the effected areas. He’s tough, smart, compassionate and he won’t give up until he’s reached his family. But he’s still a teenager, and he’s not always right or kind, and he’s just…realistic. Darla is the same, and her and Alex’s interactions are wonderful. Snarky, mean and headstrong, yet tough as nails, one smart cookie and ultimately scared, Darla is just as complicated yet loveable as Alex.

Ashfall is a bleak, stark and realistic look at what life could be like if a supervolcano decides to erupt. It showcases the lowest that humanity can go in trying to survive, and yet also shows that people can be capable of amazing compassion and love, and that in the end, we will do anything to survive. This book will make you want to both cry and cheer, and definitely makes you want to hug everyone you love. It’s fantastic, and I cannot wait until the sequel.

eARC provided from Netgalley and Tanglewood Press. Thank you!

The Parental Advisory sticker is for those few books reviewed here that are adult in nature and contain explicit sex.

All books reviewed on this blog have either been purchased by me or sent to me in exchange for my honest review. The only money I may potentially make from this blog is through being a Book Depository affiliate. Proceeds are used to fund giveaways.
All quotes are copyright © their respective owners.